3rd November: A Tale of Two Cakes (and some Doofers)

I am now the proud caretaker of a five year old.

Yes, the Big One’s birthday – and by God did we have a build up to it. It’s no small relief that it’s all finally over.

And it got me to thinking how absolutely awesome it is to be five. And he’s already asking when he’ll be six. Enjoy the moment dude!!

The big day dawns, clearly they’re all up with the lark, in hyper-thrust. I had set out the tableau in the lounge the night before. The longed-for BMX adorned with ‘birthday boy’ balloon and cards jammed into the spokes. A few bits of Lego and a Scooby-doo wrapped underneath.

His little face is a picture as he opens the door.

We got there. Finally. Clearly a five-year old has no concept of any time and budget restrictions. His list of demands would change on an hourly basis. He’s a cunning one though. He seems to have twigged that we don’t respond well to “I want a Bike”. Instead he takes his little bro off to one side, and in a stage whisper says “Guess what I’m getting for my birthday….a batcave” Or to his schoolchums (always within earshot) “I’m getting a super blaster jet plane for my birthday” Erm…no you’re not mate.

The poor boy had to go to school on his big day. Although to be fair it was undoubtedly more craic than being at home with me and his little sister. I send him in with some special crispy cakes for his pals – as that seems to be protocol #learningcurve. Special why? I hear you cry. Special because they are the trademark confection of His grandma, Bari, who I have told you about before.

“Doofers” are made by melting Mars Bars and butter together in the microwave. Basic rule is one Mars Bar to 1oz butter. DO NOT be tempted to use Mars Bar copies or any form of butter substitute. It doesn’t work. The deliciousness is all about the lard. As a rule I use 3 Mars and 3oz butter for a big batch. Stir in enough rice krispies until they are just coated with no spare mixture at the bottom of the bowl. Then. Here’s the secret. Push them into a lined tin and squish them down with the end of a bottle. Bari has an amazing wooden tool for this…I’d love to get hold of one. When they’re really compacted, put them into the fridge to set. Once set, cover with melted chocolate and refrigerate once more. Then slice into small squares. Try them. You won’t go back.

His birthday falling around Hallowe’en, I always use the pumpkin scrapings to make a cake. For the tea on his actual birthday, I prepare just that and carve it into a 5. The recipe comes from Good Food and I promise you it’s more delicious than Carrot Cake. Here’s the RECIPE

Now to the main event. The party. As requested, we booked a party for 15 of his mates at one of these hellish nerve-jangling soft play gaffs. As the day nears we overhear “I’m not having a party, I’m going to the zoo” “I’m having a bouncy castle party”. The guest list changes daily, in spite of me having invited everyone a month before. He loudly tells some classmates that they’re invited when they most definitely are not. I studiously avoid their mums’ questioning gazes.

Now I don’t remember ever demanding a particular cake growing up. I think I possibly knew better. My Big Boy has come up with themes ranging from Superheroes to Bugs. We finally settle on a volcano, as I think it’s just about within my range. The cake is chocolate sponge made in a giant cupcake mould. I decorate with Sugarpaste icing in various shades. Looking for the wow factor, I find myself scouring the Internet for dry ice. Realising that I can only order a minimum of 5kg from London, I lay that dream to rest and settle for some fountain candles for £3.

And just as my plan comes together, I overhear him telling his brother about his awesome Spiderman cake. Why I oughta….. 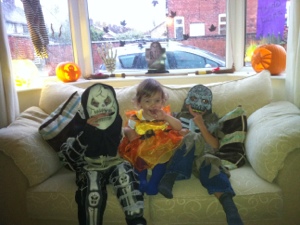 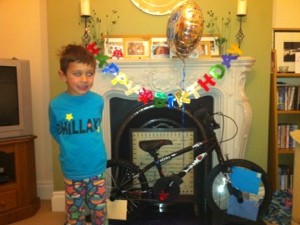 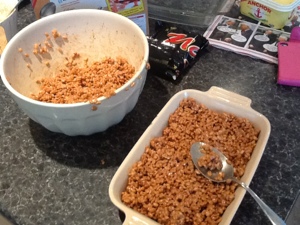 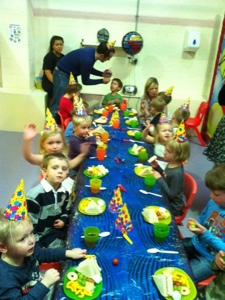 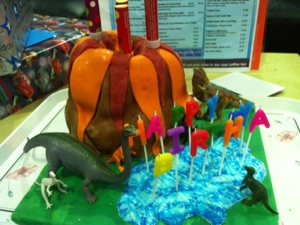